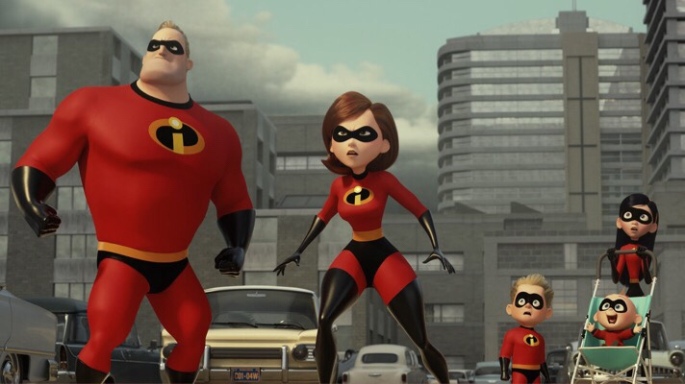 It is common knowledge amongst everyone who knows me that I live for superhero movies (from the marvel universe of course). Now, I would like to think that my obsession with superheroes, all started off with the first Incredibles movie, which was released when I was 8 years old. So of course 12 years later, I could not miss the 2nd installment of the movie that basically shaped me into the lover of all things marvel that I am today.

Incredibles 2 proved to be one of the few movies actually that needed a sequel. It pretty much started were it left off all those years ago, with a little recap included to jog our memories.

What I loved about this film was the play on gender roles, which in 2018 are practically non existent. It was great to see a film aimed at kids representing a modern family, where the female (in this case Mrs incredible) actually went to work & became the breadwinner of the household, whilst the male (Mr incredible) stayed at home and took care of the kids.

In the film we see some resistance from Mr incredible, who is having a hard time adjusting to his new ‘role’. In my opinion this represents our society, as the ideology of women being child bearing machines & housewives have been around for literal centuries. This type of representation especially in today’s day and age is extremely important. It is vital that kids of all ages can see the diversity that exists within families. No longer are we subjected to the stereotypical gender roles and the binary oppositions that come with it.

The modern family has changed quite drastically over the past few years and it is time we start to see the current state of our society reflected in all media forms.

This week I haven’t really found any new music that I like enough to post, so I thought it would be best to throw it back, and dedicate this Tuesday’s tune to Turning Page by sleeping at last.

Turning page was featured in Breaking Dawn part 1 (the 4th instalment of the Twilight Saga). It was one of the most memorable tracks from the film, due to the fact that it was used to walk Bella (the protagonist) down the aisle. Naturally 15 year old, Twilight obsessed me, decided that I too would one day walk down the aisle to that song & have my wedding on August 13th, the same day as Edward & Bella. A little overboard I know, but we will wait and see.

The first line of Turning Page beautifully captures the essence and emotion that is carried throughout the remainder of the song. This song is most definitely the reason to why I am constantly in my feelings. Even at such a young age I loved the idea of love & lived vicariously through music like this . Although I wouldn’t label myself as a romantic, one day I hope I will actually be able to listen back to this song and feel for myself just what Sleeping at last were singing about, and who knows, I may even walk down the aisle to it 😋